BC has the best craft beer scene in Canada. Last weekend the Croatian Cultural Centre in Vancouver was the host of The 2017 BC beer awards. A cacophony of BC craft breweries descended upon the two ballroom floors showcasing their best and lucky me, I got a chance to be a part of it! So I thought I’d write about the highlights from this amazing event!

This beer from Swans brewery and White Sails brewery on Vancouver island won best in show. That means that out of all the individual category winners, this one was judged to be the best of the best. It was the first and last beer I drank at the event. It had a lovely smoky quality and sort of reminded me of a Sunday breakfast. It has almost a fatty flavour like bacon and was slightly savory. Pure deliciousness and a true event highlight.

2. Boombox all star line up

Lets just say I made many trips to the boombox booth! They brought their three newest releases that I swear they were the hardest to get beers in BC. Juicy AF, Rad Seeker and Ultra Deluxe. Where else do you get all 3 of these amazing brews at the same time? Needless to say, it was a moment of indescribable happiness when I saw this line up.

3. Fieldhouse and Twin Sails collaboration dry hopped sour
I think I tried this one 3 or 4 times. A perfect beer in every way.

On a side note, Twin Sails swept the Imperial IPA category and won bronze, silver and gold and also took home innovator of the year. If 7 awards doesn’t prove you to be a top BC brewery, I don’t know what does.

Okay, so I was lucky enough to get yo go see the judging of the beers at direct tap. It was so cool to see all of the entries from the many BC breweries and the judges hard at work tasting the beers. All of the judges are BJCP certified and scored the beers based on a variety of factors in a blind taste test. So cool to learn about the judging process.

The Croatian cultural center in Vancouver hosted the event. This turned out to be such a fantastic venue not only because its walking distance to the skytrain (drinking and driving isn’t cool), but it was big enough to host so many different breweries in its 2 main halls. 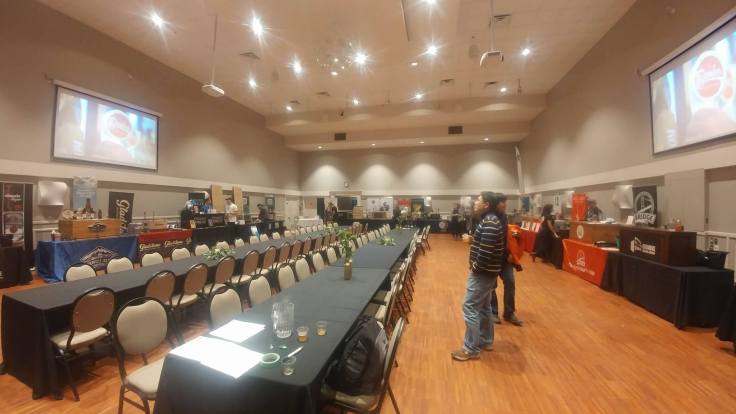 6. The food
I know I said 5 highlights, but I have to talk about the food! Tap and Barrel was serving bratwursts and pretzels that were delicious and reel mac and cheese was on site with their unreel mac and cheese dishes (personal favourite is jurassic pork). The perfect foods to go with your beer.

Seriously people if you love craft beer make sure you get your tickets early next year because this event sells out quick! Thanks to all the amazing organizers, volunteers, sponsors and breweries for making this event happen. Already can’t wait until next year!